My day started at 4am when the cat decided he needed to climb the cupboards in our bedroom. After letting him out, I could not get back to sleep and was up shortly after 5 to start packing. The reason? Well, last night when I was (what I thought) done packing, I still had a ton of stuff that would not fit in the top box or tog bag. Since I had not gone to sleep before 3.30 the previous morning, I decided to try and get some early shut eye and figure things out in the morning. 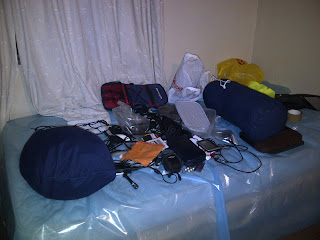 After repacking the bag twice – now only 3 shirts for two weeks, (but I can get them washed halfway), I decided to load another bag on the back. Must admit I am not sure I feel so comfortable with the thought of my luggage so high, but it’s all I can do for now. (So anyone reading this and have soft panniers they want to sell, please let me know!!). 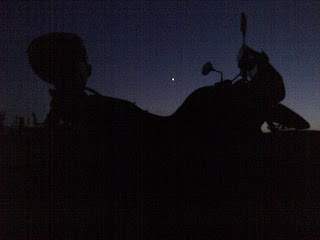 I got away an hour later than I planned, as I tied and re-tied my luggage several times. The extra bag meant I had to off-load, and scratch in my top box for the spare strap. Fortunately this happened, as I realized then that my top box could not be opened while other things were tied to the back. But genius that I am, I made a plan and it (sorta) works now!

It was a glorious day. I had a wonderful time driving past orchards in full bloom and dams full for the first time in quite a while. I have never seen this part of the country so green. The fact that I can stop anywhere I please and take pics as much as I want, really appeals to me. 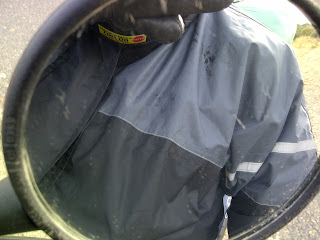 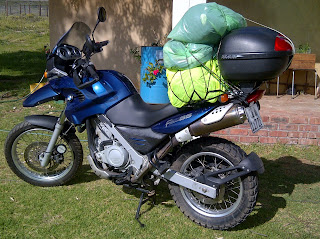 I was attacked by some form of mass sworm!

Met up in Oudshoorn with a dear friend, who said that I should shout, any time I had a problem along the way, so that is quite a big relief to know help will come racing at my beck and call! From there I rode direction Langkloof. This road is parallel to the N2, the coastal national road from CT to Durban; obviously there was a lot of rain, since you see full dams and overflowing “wetlands” as far as you go. One literally rides between two mountain ranges. I had the Swartberge (Black mountain) on my left and the Langeberg range (Long Mountain) to my right. Green pastures, cattle and sheep as far as the eye can see – OK, till where the mountains start! This is an incredibly beautiful area. Unfortunately my battery started dying on me, not to mention that the terribly strong wind from front/right was icy, so I did not stop much. 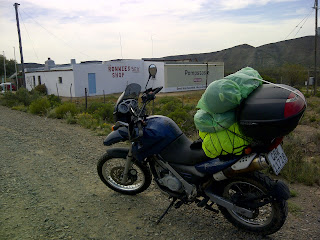 I rode up a pass with exquisite views of the Langkloof and into the town of Uniondale, where I stay for the night. Uniondale is best known for the lady hitch hiker often seen along the road. Here the story:

It happened on an icy cold Easter weekend in 1968 on a highway just outside the Route 62 town of Uniondale. 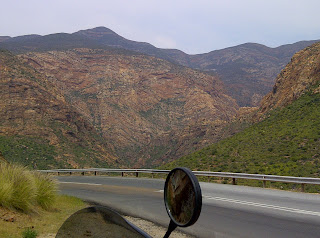 A newly engaged couple, Maria Roux and GM Pretorius are travelling between Graaf Reinet to Riversdal. Maria, with her long dark hair and clothed in a dark blouse and long pants, is sleeping on the backseat when her fiancé loses control of the car in the stormy weather, just 20km outside of the town. The horrible accident only injures Pretorius but his fiancée's fate is far worse as she is killed. 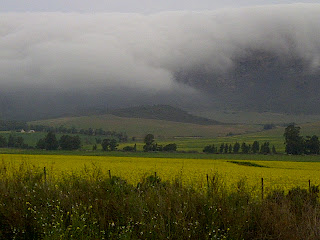 Legend has it that a woman, matching the description of the unfortunate Miss Roux, can be seen walking alongside the road where the accident took place. Some have ventured to pick her up. But minutes later they would hear a shrill laugh, the sound of a car door closing, chilliness inside the car and then a total disappearance of the woman.
Sometimes a smell of apple blossom would accompany her - which would make sense, given that the town of Uniondale is predominantly a sheep, goat, and apple farming community. After she disappears, only the smell of apple blossoms reportedly remains.
The tragedy of the Ghost of Uniondale is believed to have been caused by Pretorius' marriage to another woman a year after the tragic accident - causing Maria's soul to become restless as her fiancé had found love in the arms of another woman.
The first recorded sighting is said to have been during the Easter weekend of 1976.
Since that first weekend, many people have experienced the same sighting. During Easter the local police department even keeps some sugar water on tap, just in case a Uniondale ghost sighting occurs. 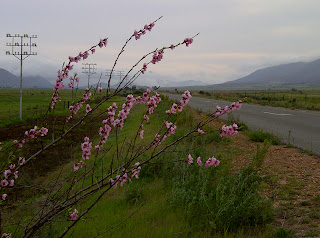 But who knows, if you ever drive up to Uniondale on an Eastern weekend you might pick up a smallish female hitchhiker. If you suddenly become aware of an apple blossom smell and get a cold chill down your spine, you should know that the Uniondale Ghost has hitched a ride with you.

I often saw a lonely fruittree in full blossom, guessing someone must have thrown a pip out the window and it founds its spot to grow?

Tomorrow I do more of the Langkloof and end up with family in Port Elizabeth.
Over all, today was absolutely super! Nice weather to travel in and stunning views all the way! Wish I could have shared it with someone … 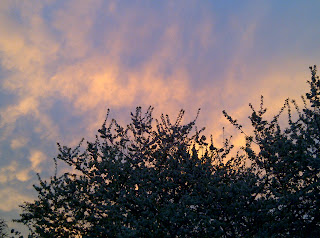 Apple blossoms in the sunset as I reach "home"