West Coast trip with my dad

Day 1
Montagu – Ceres – Prince Alfred Hamlet – Op die berg – Citrusdal - Redelinghuys
Although cold and overcast, I woke with a feeling of anticipation and a well know buzz. Due to excitement I did not get to sleep till well after 2am, yet I felt rejuvenated and ready for this trip. The reason for all the anticipation was because I was going to do a trip with my dad! He has just turned 71 and never been on a bike trip in his life. Yet he is willing to take to the roads on my trusty steed, prepared to learn why his eldest has fallen in love with bike riding! 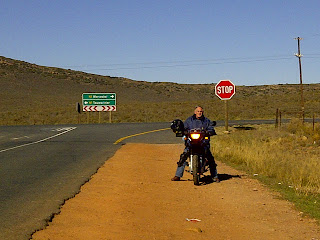 I got a slightly newer bike and bought it for the lower suspension, since I cannot reach the ground. Just before selling the first one (to pay for the second one), my dad suggests I hang on to it for a moment so that we can do a trip together before it’s sold. What?! Hell yeahhh! I’M IN!! So our trip will take us close to the West Cost where we will be staying with his sister and husband and make our way back on Monday. The bikes: 2 x BMW 650GS. 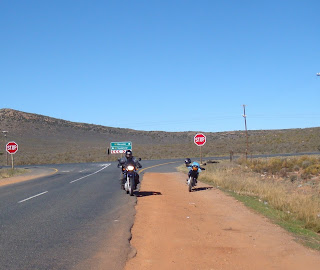 Since he does not have as much natural extra padding like me, he got dressed in enough clothes to dress an army. A very nice but cold day was forecast and I did not want him getting cold. He also has osteoporosis and problems with his back. I put a Trans Act plaster on his back and after fitting a cushion in the side pocket, tied my tog bag in such a manner that he had a “back rest”. My sister let him use her safety gear and came to see us off.
After dressing and re-dressing, packing and repacking  we got away an hour and half later than planned. A picnic of boiled eggs, sandwiches and a flask for coffee was in the top box with me, and we left, waving my mom and sister off with cheerful excitement. It lasted for all of 30 seconds….

My bike died on me!! After several attempts to restart it, I phoned the mechanic who always fixes my bike. He had recently serviced it. After explaining the symptoms, he surmised the problem was with the petrol pump and it needed to be removed. It should take us less than 2 hours to fix – yeah right, just what we need! My sister took the bike down to the farm’s workshop – thankfully this did not happen in the middle of nowhere, with no cell reception!! After off-loading the luggage and removing the seat, my dad tugged some wires and removed a few switches without taking the petrol pump out and suddenly the bike started. Not knowing if it will wait till we cannot afford it and cut out again, I took it for a short, but rough spin. Letting it hit a few potholes and bumpy bits, making sure it did not give any problems.

It seemed fine so I got the seat and luggage back on. I had left all our gear in my dad’s office and when we went round to fetch it, my mom offered us a sandwich. I gratefully took it, since I had not had breakfast (meant to eat along the way) and it was almost noon. After refuelling in town, at last we got to leave via the Koo and Keisie valley over the beautiful Burgers pass. At the lookout point I went for my cell phone, which serves as my camera. Not only is it small, takes good pics and (relatively) handy to come by from the biking gear, but our camera was stolen in a spate of robberies we recently had.

I went ice cold! I had forgotten the phone/camera in the office!! So we made arrangements where to meet up again and I tuned back and raced for town. Phoned my mom and asked her to meet me there to save time and had to go and fuel again, as I would not make the next stop.

Going a bit fast and hoping my dad much slower, I met him at the arranged spot just off the N1 close to Touws River where we turn off on the Ceres road. At last all our problems and dramas were over and we could now concentrate on the trip! A few kilometres from there we stopped at a nice spot to (at last!) have our picnic. Low and behold! The flask had broken and a million shards of glass was everywhere - and everything in the top box was drenched! I am just sooo glad that I decided against putting coffee in the flask and it was only water!

Yet we enjoyed our whole-wheat cheese sandwiches and boiled eggs. We had to decide whether we would go the safer route, or the longer but prettier route. With hours into our day, but only a third of the distance covered, I was worried about riding in the dark. Also worried how my dad and his back would cope, not to mention parts was on off-road! Although he has a small scrambler, he has never done long distances with such a heavy bike on gravel! We decided to get to the turnoff and then decide. So far he was coping really well. The Theron's pass was great and about 10 kms before Ceres was the turn-off to Prince Alfred Hamlet. We have an intercom set between us and as we were approaching, dad said he was fine to do the longer distance and turned off, right onto a very rocky, loose piece of gravel road. 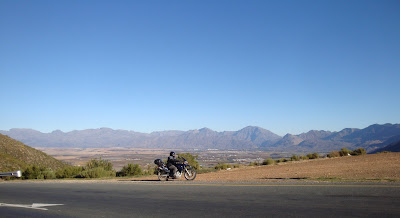 My heart skipped a beat and I was so worried for him, worried he would come down soon! Yet he was a true champ, stood up in the saddle as I had explained and did the piece of gravel like a piece of cake! Coming into the small town of I was struck by the lovely yellowing fruit trees and surroundings. The scenery had changed from a more arid, shrub-growing area to fruit trees and autumn colours!
As you leave the town, one starts climbing the awesome Gydo pass, looking down on orchards and dams as far as the eye can see. No sorry, till you see more mountains in the distance! By now the sun was quite low, causing beautiful lighting over the whole valley. After a quick stop for some pics, we headed further up the mountain and then hit a plateau, covered in grass lands and fruit trees. The Du Toit family seemed very prominent there and apparently has of the largest deciduous fruit farms in the country. All well kept and glowing in the soft afternoon sun. Patches with animals, other trees or dams kept the scenery alive. 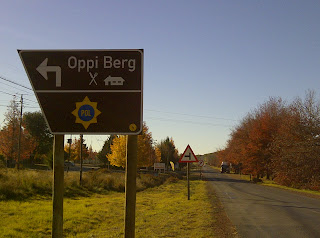 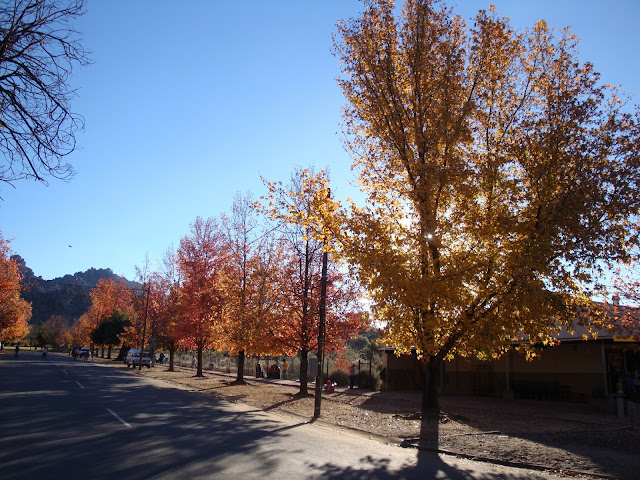 We thought we had gone right passed and missed the town of die Berg (On the Mountain).
We had to refuel there. After riding several kilometres on this plateau, we suddenly hit the very small place that had the most spectacular display of Autumn I had ever seen! From reds, to orange and yellows, this little place was “lit up” like a neon sign! The sun was setting behind the high mountain back drop, causing the trees to light up like only nature can! 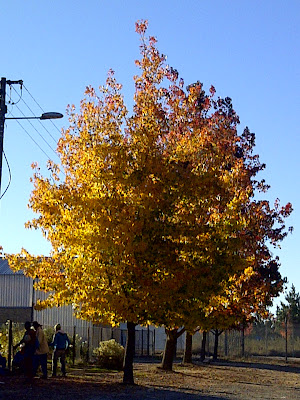 We refuelled and had to get a move on, as we had done less than two thirds of the way and the main gravel road and pass was still ahead of us – and the sun was setting! But alas! …. We hit such bad potholes that we had to go fairly slow! The next we were in the narrowest of narrow valleys! High mountains rose on either side with orchards on the left.  The last rays of the setting sun lit up strips of light that would squeeze through crevices, enhancing the pink of the mountain on the opposite side! I felt so alive and such a sense of wellbeing as I realised once again the privilege I had to absorb all of this from my bike! 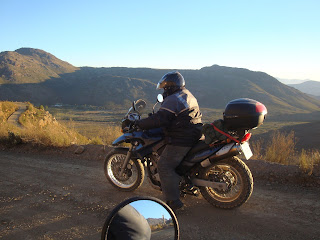 As we came out of this valley, we hit the sun right from the front – or should I say the sun hit us?! The shiny, (very) old, well ridden road threw up glaring rays as the last of the sun tried to make an impression on us. We did not have much time to worry about that, as the next we hit the gravel road! 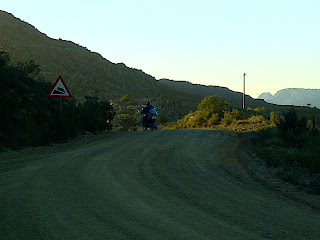 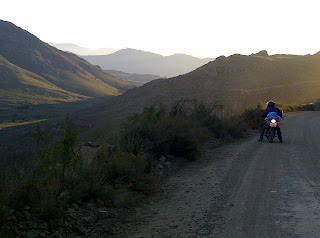 It was after 5pm and every farmer and buss in the area had somewhere to go, causing us to ride in a cloud of dust for most of the next 30 kms  It was not long before there were places we could hardly see the road. The sun was so low, that we had no where to look but directly into it. Due to the dust on the visor, it was throwing spears of blindness our way. At least they had just graded the road – obviously especially for us, as we could see it was freshly done! 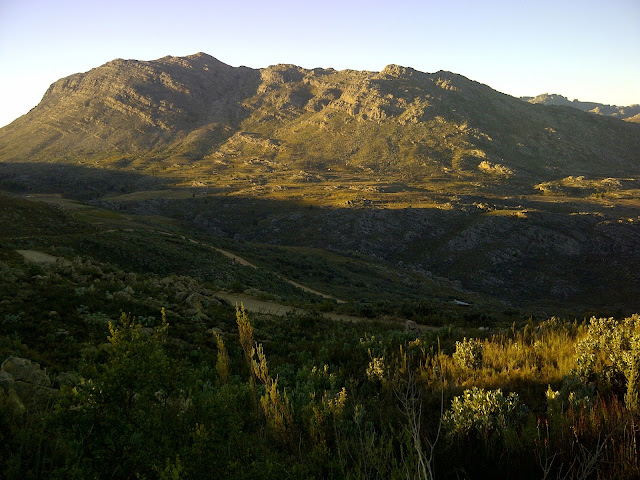 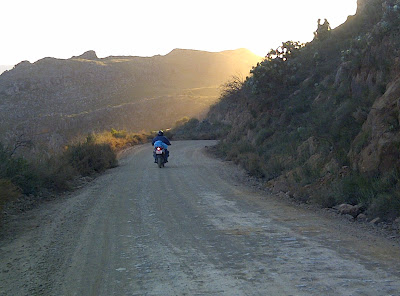 Although some loose or rocky gravel, most of the road was in a really good state – guess the grading caused all the dust, but we could not complain. Parts of it reminded me of the Swartberg pass and some of the Prince Alfred’s pass between Knysna and . My dad was doing so well and just kept going as if he had been riding dirt roads all his life! Some sharp turns, deep slopes and lovely views made this a memorable pass. 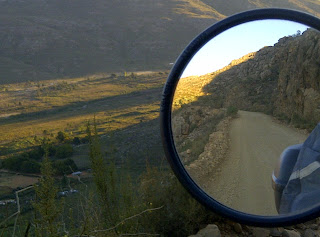 After hitting the tar, we were still high above Citrusdal and had a wondrous view of the (once again) setting sun over the valley below. The last rays of sun reflected from the water on the dams like little mirrors dotted all around. The nice turns in the pass coming down is a Twisties-lover like my self’s dream come true! The entire town was surrounded by a pink haze, even brighter on the mountains to our left as we neared Piekenierskloof. Little traffic and a broad road made it possible to keep looking down on the Citrusdal valley from the opposite side from where we were less than 10 minutes earlier. The soft glow of a busy day quieting down for the night touched me and I could not stop absorbing the way the disappearing sun managed to change the scenes over and over again! 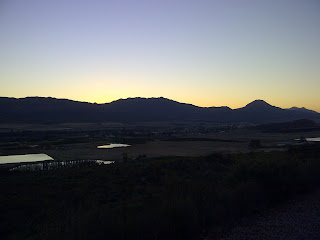 As we drove over the neck of Piekenierskloof, we just saw the last sunrays dipping one final time behind the next mountains across the plain to the West. Looking down we had our first glimpse of the beginning of the Swartland. We were almost there… 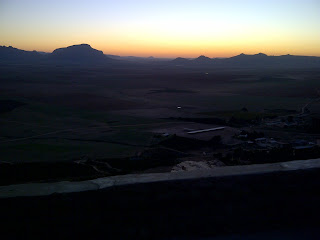 Just before the bottom of the pass we turned off – direction where the sun had recently dropped in behind the mountain. As it got darker I experienced a calmness enveloping me. Although the sun had set, the sky was still beautiful and the air fairly warm. Once it was dark, we came down with our speed as there were small deer that could cause big trouble if hit. In spite of getting darker, for at least another 20 minutes we could see trees and objects silhouetted against the night sky. I have never noticed things like this from a car! Once again – viva for being on a bike!! 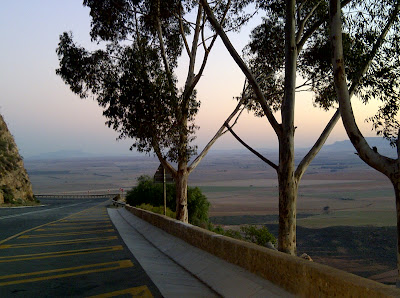 We arrived safely - tired but happy! Good to see family we love! My dad did well and his back never gave trouble. I got to see new places and experience 3 sunsets in one evening! I feel complete!!
Posted by Unknown at 13:23

Email ThisBlogThis!Share to TwitterShare to FacebookShare to Pinterest
Labels: West Coast, With my dad