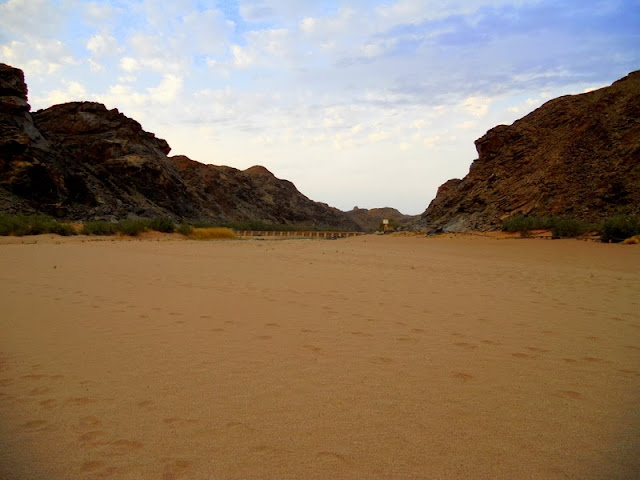 After a gruelling (almost) 2 weeks we decided to spend a day at Ai Ais. This is where a lovely hot water spring with campsite is situated beyond the Fish River canyon. I woke to the twitter of birds and a peacefulness that I just soaked up for a while. It was the first time I could sleep late (as in 7am) and catch up on my blog. I even ended up falling asleep later in the morning till the sun burnt me out of the tent an hour or two later.

I tried working on my blog – yes, I must be honest, somehow very little writing happened on the entire trip and it was good to spend a few hours trying to get things in order. Toni had gone for a very long walk and came back with some nice pics of the (almost) dry river bed. 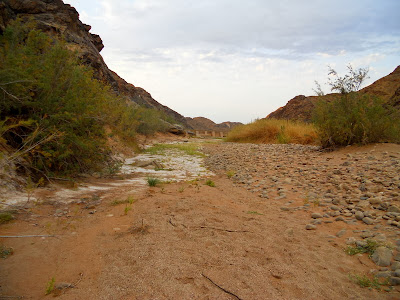 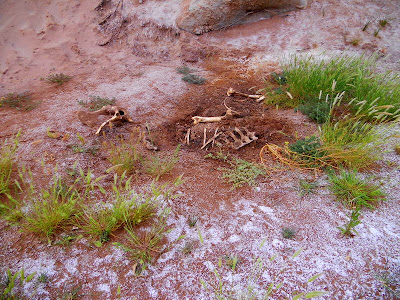 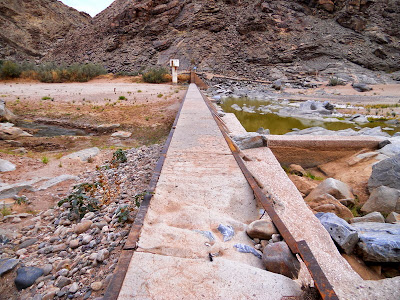 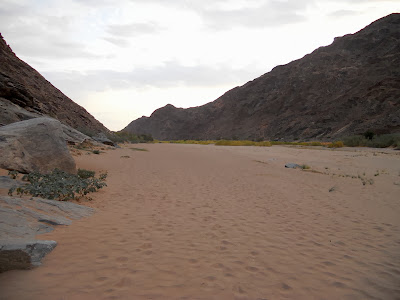 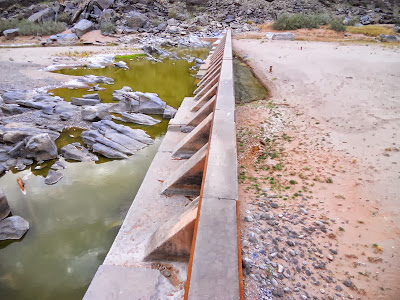 We went for a swim in the (so called) hot pool, but the water was barely warmer than mom’s stare after she discovered I'd taken my horse on a sightseeing trip through the house. I was also disappointed with the stock in the little shop. No bread, no meat and definitely no fresh vegetables. Since we had done extremely well with the finances and had some money left, we decided to dine out and had Oryx steak for supper. My medium-rare steak ended up well-done, but since it was meat, who’s complaining. The potatoes and veggies (yesss… veggies!) were excellent. 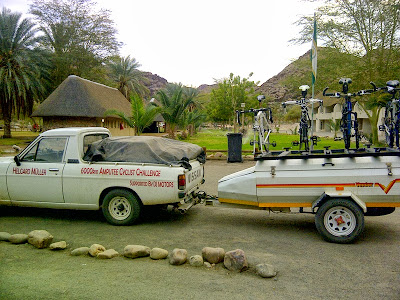 As we left for supper, some hooligans with large cars and even larger speakers for their music pitched up close to our tent. We were relieved that we would be further away while having supper, but worried how we would get sleep that night with the racket going on. Lo and behold, when we got back, there was the hugest of huge fires burning but not a soul in sight. I was not sure if they were asked to leave or had their fun for the night, as the place was strewn with empty liquor bottles and cans. Since we had not been able to have a fire for the entire trip, we each settled down on a stone and thoroughly enjoyed the glorious fire, specially lit and ready for when we got back!
We could not stay up too late, as the next day was once again an early start. Yet the day off gave me a good rest. In spite of the rest, I faced bed with some dread. This would be my last night in a country that had touched me in so many different ways. I hated the thought of leaving – leaving a place that had unexpectedly crept into my heart. But off to bed now – tomorrow will be a long day. 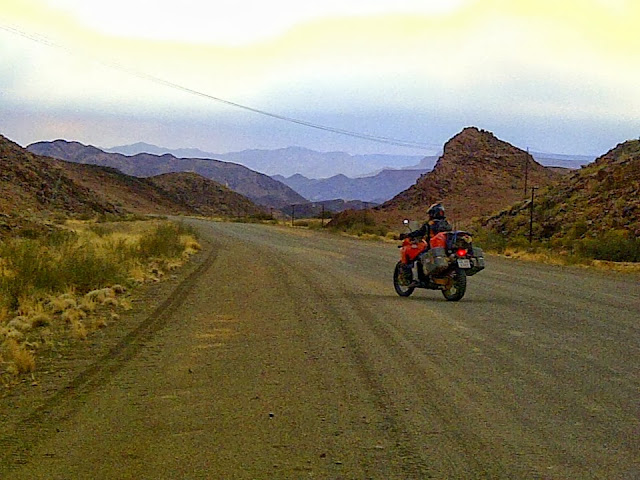 Thanks to not having to pack up my tent we actually did not get away too late! The sunrise was absolutely spectacular and it reminded me of the typical pics one always sees of a sunrise or sunset of the . 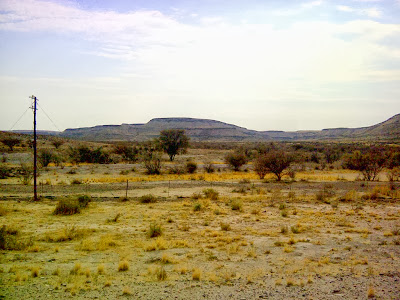 The slightly overcast sky gave us a little relief from the sun for the time being. We were riding through hills and small mountains that gave the whole area a feeling of closeness, yet beyond that one could see more of it in the distance, making you realise the vastness of this country.
After riding some tar for a while we were back on the gravel roads, discovering that the and Ai Ais were way further than I thought! Due to unforeseen circumstances in , we decided to cut out the wild horses at Aus and also the Canon Roadhouse, trying to get back home 2 days earlier. Yet we wanted to see the and even the Roadhouse, so we were pushing a little to get as much as possible fit into this day. 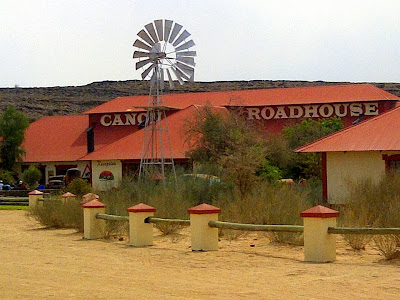 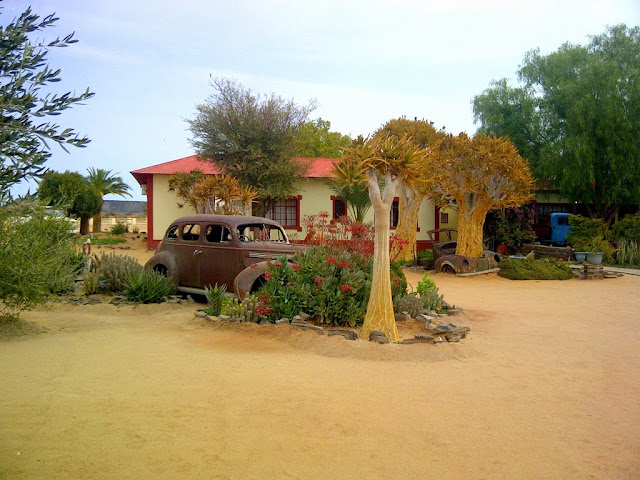 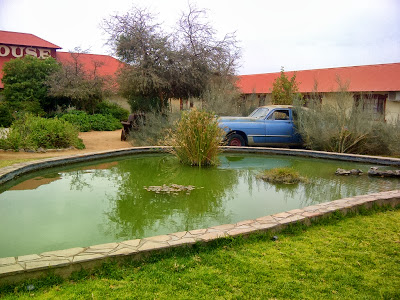 We hit some really bad spots, where the corrugated stretches could have been easier if one took it a little faster. Unfortunately there were potholes and unforeseen stretches of sand that would take us down if approach them too fast, not to mention damaging the bikes. So we were forced to go a little slower, making it a long stretch and many hours in the saddle. 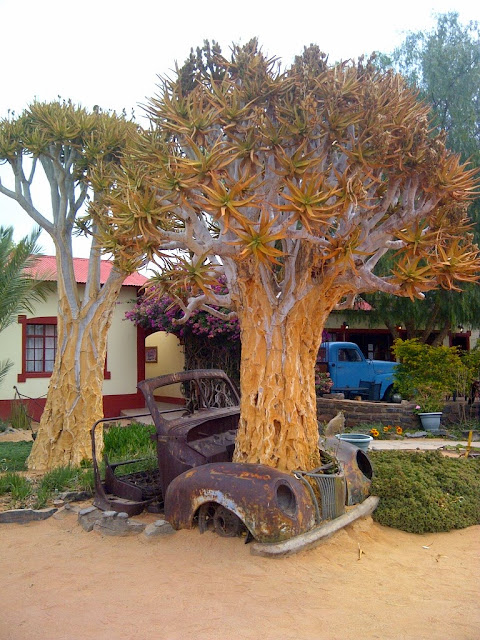 But boy, was it worth it? This day must have been one of my highlights, for several reasons. 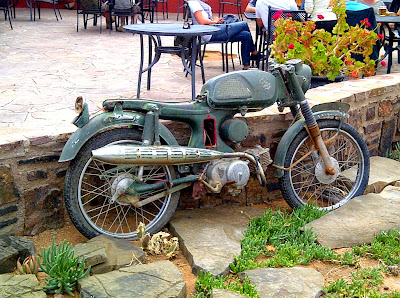 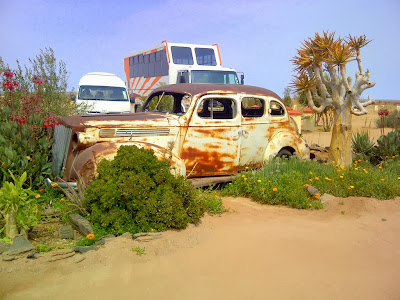 I had no idea what to expect at the Canon Roadhouse. Arriving there, we were met by loads of old cars and trucks, all placed either next to, between or even in plants, flowers and trees. Even a really old motorcycle! Unfortunately we were pressed for time and could not stay too long.

Once we got to the “entrance” of the , we discovered we had to pay R60 each to go and look. Being late as it was, not to mention pretty knackered, we almost opted for not going in. Then decided since we have come this far and I might never get to this country again, lets just do it. And thanks heavens we did!!

I have no words to describe the magnitude and awesomeness of that sight when I looked down into the canyon. Pics cannot do it justice. I just know I am a very very small speck in the order of things around this country. The canyon deep below with crevices, rocks and riverbeds is forming something so absolutely stunning, that I could just stand in awe and absorb. 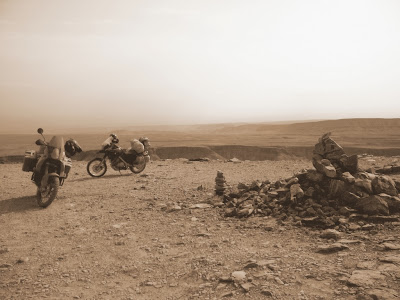 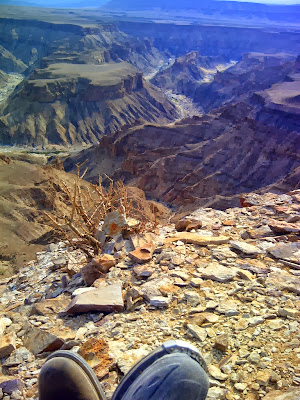 Our feet at the edge of the canyon


Minus the helmet cam for the wide angle view, I took a short video clip with my cell phone. For sure not great quality, but at least one can have a small idea of what I'm witnessing. This is also my first attempt at video editing with content from my cell, so please be impressed.

From the canyon we had to make our way to Ai Ais, more than 50kms away – and I thought it was something like 12kms! Needless to say it was getting late and the sun started dipping behind some of the mountains.

We were in a nature reserve and have been warned to not go too fast due to wild animals roaming all over, so in spite of trying to go at a slower speed, we were well aware of how dangerous it would be if we were to still be on these roads once it became dark. Not the best of roads, we picked and dodged our way between potholes, sand and loose gravel.
On our way to the a Gemsbok had suddenly crossed the road in front of us and as I slowed down to have a better look at this magnificent creature standing right next to the road. My attention was drawn to movement on my right. A second buck also wanted to cross and I was obviously in the way. As he was running next to the bike, I slammed on brakes. Fast (brilliant actually) emergency braking brought me to a standstill within metres as he almost jumped me off the bike when trying to leap across the road. He passed less than 3 metres in front of me. He was so close I could see the hair of his coat!! Thanks John and Peter for teaching me the emergency breaking, it probably saved my life today! I had to take a moment to recover and try and breathe again.  The Gemsbok is my favourite buck and this was a horrific and terrifying yet thrilling experience I will always treasure!

Now (obviously) going much slower, we got to see the sun set behind the breathtaking mountain ranges. Every turn we took was a different or more stunning view than the previous one. Although my heart was still thumping, I had an inexplicable feeling of euphoria as I took in the views and scenery. The last stretch was through the very mountains I had been admiring all along, with the soft glow of the setting sun highlighting the rugged rocks and outcrops.
We arrived at Ai Ais hot water springs with the last rays of the fading light. Although we were pretty knackered, the tents went up fast and we later went and introduced ourselves to our neighbours, mentioning to them that Ai Ais had no meat to buy! A braai grid had been lugged along for almost 4000kms now and we had still not been able to use it - plus I would be delighted for some protein!! Just as we sat down with our pasta, the guy comes over with a plate full of meat! Steak, sausage and ribs!! Enough to feed an army! Says his fridge door came off and he was going to lose the meat if he doesn't cook it. Toni was still declining the offer as I put the first piece of meat into my mouth. NO WAY was I saying no to this offer! The little Italian can eat huge amounts and we finished the pasta AND all of the meat! Obviously the full stomachs were pulling the eyelids southwards… We barely made it back to the tents, almost crawling back from the bathrooms.

Dog tired but exhilarated and satiated. What a day! I will be dreaming of Canyons and leaping Gemsbok all night long. And meat! Yep… just what the Dr ordered!